Have you ever been at the point where you felt everything was firing on all cylinders to your goal then out of nowhere, then Bam! It crumbles before you?

You want to try to control the situation only to realise the more you grapple with it, the worse it gets? When on the path to generating your own passive income stream curve balls WILL be thrown at you.

Whether it be Google updates, lack of time, dealing with people or unforeseen events there always seems to be something that will interrupt your flow. The best way to learn, especially when shit hits the fan, is to try respond objectively with the mindset of ‘what can I learn from this’ rather than react. After passing the initial test of character (which when in the moment all you want to is yell ‘Faaarrkkkkk’), is how you regroup and restrategize your path going forward.

You may remember how I was building a young team of developers, Glenn and Sophia, who were based out of the Philippines?… I had offered both my front and backend developers an internship to build all my websites which was all looking honky dory but in the end, these guys needed jobs…

It wasn’t something I could provide on a full time basis.

I would end up going broke supporting these guys when I’m not earning any money myself. I don’t blame them for needing cash. Who doesn’t? They are fresh out of college wanting independence and to support their families. The Philippines can be a tough country to live. The cool thing is that despite the poor timing, they want to stay in touch and see how the journey plays out. As the income begins to start rolling in, the opportunity may come up again down the track to work with them again. Glenn and Sophia are a passionate enthusiastic bunch and I do hope we can work together again too. For now I’m going to have to take outsource platform route… I just hope I can find someone good. But I’ll write a post on that later. For now I have to share a recent discovery!

Introducing the ‘Screw the 9 to 5’

When we were in Chiang Mai back in April, I was introduced to the Screw the 9 to 5 blog by a guy we regularly meet at our favourite breakfast cafe, Birds Nest cafe. Just like Tim Ferriss’s ‘4 hour work week’ the site has a brilliant attention grabbing name! I wish I had thought of that!

I’ve been following Jill and Josh from the Screw the 9 to 5 for bit over a month now and they are killing it. But what changed my whole perspective whilst reading their story was how they approached building niche websites. Essentially they build niche sites around a product they are affiliated with and earn cash when customers click through their site to purchase the item or service from merchant. Simple right??!!!

Their strategy is straightforward and I believe it will be the fastest way to start generating income and put it in auto-pilot. I’ve recently signed up to their course – Lifestyle Affiliate – and I’m well on my way to creating my first affiliate site. Boom!!!

I’ll keep you updated on the progress of the learnings. Excited much!!!

I’m glad I was introduced to the ‘Screw crew’. I definitely feel a sigh of relief knowing that its is actually possible to start generating an income online sooner rather than later. My initial strategy was to build authority websites. Authority sites take a lot of time and energy before you start seeing results! The worst part – it can take years before you see any progress. I haven’t got that long so Its not the best strategy for me right now.

We return back to Australia for a wedding in March next year and its my mandate to be well on my way to earning $1k per month by then! Otherwise our lifestyle choice to live in South East Asia and help those in need may come to an abrupt end!

And I’m going to avoid in at all costs!

I have reached out to Josh and Jill recently and they were nice enough to get back to me lend a hand if needed in order to reach the $1k goal. How awesome is that?!

After an epic 2 month tour of the USA, Canada and Mexico, we are now back in Siem Reap, Cambodia getting into the full swing of helping the english school and focusing on our personal projects.

The main reason for the half way round the world trip was to attend the two conferences which we had been waiting almost a year for. Both events were a major catalyst for us for many reasons but here is a breakdown of the major ones.

It was a busy couple of days over the last weekend of May and besides increasing the word ‘F*ck’ or ‘Cluster F*ck’ in your vocabulary, we learnt way too much to mention. I enjoyed Misfit Con mostly for deepening existing friendships and making new ones (I have to give a big shout out to Tyson and Kristen, you guys rock!). However when we finally got have a one on one with AJ and Melissa, what they had say jumped up and slapped us in the face!!!

AJ stressed ‘that whatever you do, don’t feel you have to fit into some archetype to make something work or be successful! Don’t jump out of one mold and jump into another otherwise you’re doing what you love!’. SMACK! 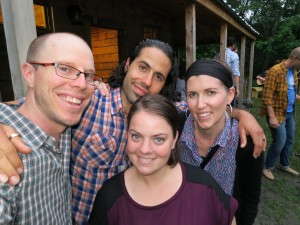 What an epiphany! For so long we have felt in our subconscious that the best way to be successful and be anywhere you want in the world was to be a typical blogger with an audience and having to constantly service them….. it was encouraging to hear and it’s forced us rethink how we can focus more on the things we love without the added pressure.

Again another great weekend this time a few more people with many A list bloggers and online entrepreneurs floating amongst us.

Jadah Sellner was one of the speakers who had many business failures in the past until finally one of them stuck – Simple Green Smoothies. One of Jadah’s main points was so simple yet profound that the general consensus amongst the crowd was that it was most helpful in all the conference! 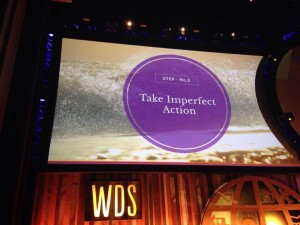 We hear many experts shouting from the roof tops ‘Get out there and do it’ or ‘Take Action’. More often than not people feel they need to do all the research possible and get everything perfect before we launch. What often ends up happening is we suffer from analysis paralysis and end up not acting at all…. I’m the biggest culprit of them all!

Well I’m here to say all thats going to change as long as I keep taking imperfect action in the forefront of my mind especially as I head into the next phase of the journey.

I was so encourage by this statement that I had to asked the question. What have you been wanting to start but have been caught up in the minutiae? Is it time for you to take imperfect action too?